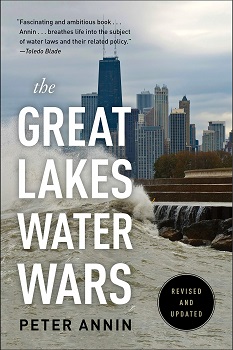 Peter Annin, author of the critically acclaimed Great Lakes Water Wars, will speak at the Mercer Library on Monday, June 24th at 6:30 p.m.

Nobody knows better than Peter Annin the stakes that are in play in the decades-old fight to protect the world’s largest freshwater system from outside profiteers. And nobody tells this never-ending story better.

—Dan Egan, award-winning author of The Death and Life of the Great Lakes

The Great Lakes are the largest system of freshwater lakes in the world and America’s greatest freshwater resource. For over a century they have been the target of controversial diversion schemes designed to sell, send, or ship water to thirsty communities, sometimes far from the source. In part to protect the Great Lakes from overzealous entrepreneurship, the Great Lakes Compact was signed in 2008. Although the Compact fulfills that promise and ensures that Great Lakes water stays within the Basin, some would say it has only shifted the controversy closer to home. Now water diversion controversies of a different kind are some of the most fought-over environmental issues in the region. Will the water wars ever be settled?

Peter Annin is the director of the Mary Griggs Burke Center for Freshwater Innovation. Before coming to Northland College in 2015, Peter served as a reporter at Newsweek, the associate director of the Institute for Journalism and Natural Resources, and the managing director of the University of Notre Dame’s Environmental Change Initiative. He continues to report on the Great Lakes water diversion issue and released the second edition of The Great Lakes Water Wars in September of 2018.

This event is free and open to all. It is sponsored by the Friends of the Mercer Public Library and co-hosted by ICORE – Iron County Outdoor Recreation Enthusiasts and the Northwoods Book Festival.