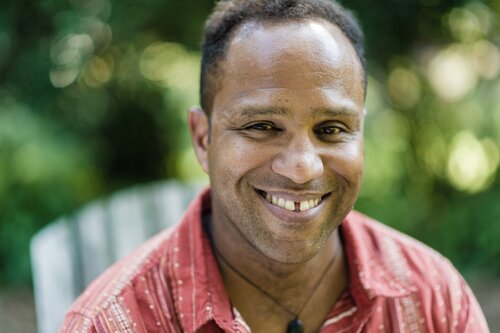 James Edward Mills, author of The Adventure Gap: Changing the face of the outdoors, will speak at the Boulder Junction Community Center on Thursday, June 30 at 6:00 p.m. His talk is the headline event of the 2022 Northwoods Book Festival, a series of events sponsored by seven local libraries to be held throughout the summer.

The nation’s wild places——from national and state parks to national forests, preserves, and wilderness areas——belong to all Americans. But not all of us use these resources equally. Minority populations are much less likely to seek recreation, adventure, and solace in our wilderness spaces. It’s a difference that African American author James Mills addresses in his book, The Adventure Gap: Changing the Face of the Outdoors. The book is part adventure story, part history, and part argument for the importance of inspiring future generations to value nature.

James Edward Mills is a 2014 Fellow of the Mountain & Wilderness Writing Program of the Banff Centre in Alberta, Canada and the 2016 recipient of the Paul K. Petzoldt Award For Environmental Education. As a freelance journalist and an independent media producer in a career that spans more than 20 years he specializes in sharing stories about outdoor recreation, environmental conservation, acts of charitable giving and practices of sustainable living. He has worked in the outdoor industry since 1989 as a guide, outfitter, independent sales representative, writer, and photographer. He is the author of The Adventure Gap: Changing the Face of the Outdoors, which was named by Outside Magazine as one of the 10 “Outdoor Books that Shaped the Last Decade.” James is also the co-writer/co-producer of the documentary film “An American Ascent.”

The 2022 Northwoods Book Festival program series is made possible by a grant from the American Rescue Plan: Humanities Grants for Libraries.